As the country settles back down after another unsettling election result and turns its anxious attention to the upcoming Brexit negotiations, I am happy to report that marmalade may turn out to be a key bargaining point.

In the Sunday Times magazine on 21 May, Guy Verhofstadt, former Prime Minister of Belgium and now the European parliament’s lead Brexit negotiator, told the 'Life In A Day' interviewer that he always starts his day with a cappuccino, Greek yogurt – and toast and marmalade. ‘I’m a fan of British marmalade’ he said, citing a ‘deep respect’ for our ability to make it just right, i.e. not too sweet and just bitter enough. I think this bodes well, don’t you? If he wants to get his daily dose of marmalade, he’ll have to keep his tariffs to himself.

So while Liam Fox was roundly ridiculed last year for his suggestion that France was in need of ‘high-quality, innovative British jams and marmalades', maybe he was on to something. I suggest he slips a jar of Fortnum's finest into Teresa May's briefcase as she heads for the Eurostar. It could make all the difference. 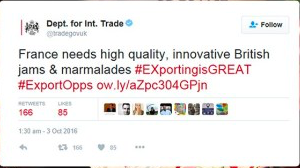 Then again, as the PM is already a fan of marmalade as a political tool - she gave the Trumps a hamper containing Bakewell tarts, damson jam and marmalade back in January - perhaps she's way ahead of me on this one. We can but hope.