I don't often write about where I live, but I should. In the seven years since I've lived here, it has been transformed from a scruffy collection of fast food outlets and nondescript shops into a rather chic little neighbourhood – from fast food to slow food, if you will. Where there was once a kebab shop, three or four greasy spoons and too many places selling fried things with chips, we now have an ice cream shop, a greengrocer, a fishmonger, a butcher and a baker (no candlestick maker yet) as well as a gift shop, hairdresser, yoga studio, children's clothes shop and this lovely cafe, where I am sitting right now. 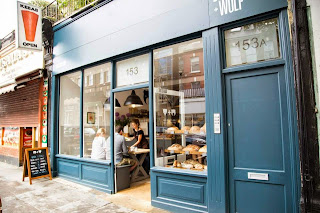 The nicer shops survived the cull – Rustique ('The Literary Cafe', battered old furniture, secondhand books and charming, shady garden), the hardware store (excellent cheap saucepans), the friendly dry cleaner and the sewing-machine shop, where an old man sits, tinkering with the internal workings of someone's Singer, and where you can buy buttons, thread and Dylon. The only sad casualty was the charity shop, which was immensely useful and is much missed. Whatever replaces it had better be good, or the locals will scowl through the window and walk on by. (Estate agents, beware.) 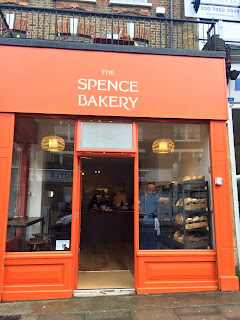 But anyway, what does this have to do with marmalade?

The joy of living here is the nearness of everything. I have got into the habit now of food shopping every day, something I would have once considered a chore, or just inefficient. But after the school run (3 minutes), I can pop into the grocer (2 minutes along the street) and then into Bear + Wolf for coffee (1 minute), pick up stuff from the dry-cleaner and be back home 3 minutes later, even while pushing a pram. So when, on a sunny May morning, it feels like time for a treat, we can be here for breakfast in a matter of minutes, with minimal forward planning.

My son had waffles, bananas and maple syrup with a banana and orange smoothie; I had sourdough toast and this marmalade.  The baby had crumbs from our plates (she loves a good chewy crust). It was a success all round, and not least because of the marmalade (and the pools of melting butter on my toast, I had to wash my hands before typing). 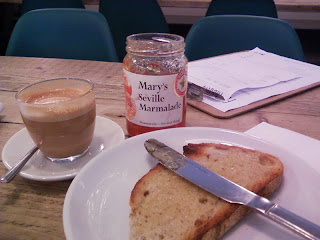 I knew it would be good when I saw the Dalemain sticker; it has a gold award from the World Marmalade Awards, about which I have written copiously in the past, so I won't here. But it's a good sign. Matthew, the cafe's owner, explained that it came from the mother of a friend, who is based in south London and Exmoor (now, there's a nice life), and it's really very good. It's a classic bittersweet Seville, with a proper homemade flavour, not too set, lots of peel, very delicious. I recommend it. And you don't even have to live in north London – she'll send it by post. Marmalade in the mail – what a happy concept.