So, that didn't work very well.

I tried this recipe, by a very respectable food writer, but I had a sense of deja-vu as I watched the pot boil... and boil... and boil... but not set. It was how my marmalade went the first few times I made it – lots of boiling, slow to set and a rather syrupy result.

So what went wrong? I won't blame the recipe, as that's like workmen blaming their tools. Although I did notice that it doesn't have any lemons in it, which is unusual – lemons are high in pectin, and every other recipe I've used does include lemon juice or pips or both. So that might have helped.

But after a bit of research, I began to wonder whether it might be the fault of the oranges. I made my first batch with lovely, petite, smooth-skinned oranges from my local wholefood shop, Earth. But the second batch was made with oranges from Sainsbury's, which were very much the Ugly Sisters to my original oranges. See? 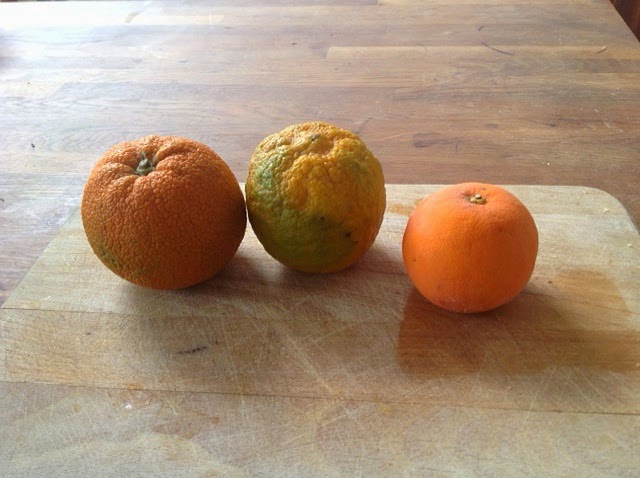 The ones on the left are from the supermarket; the elegant little orange on the right is from Ave Maria, which (I now discover) is the place to buy your Sevilles, as it is a renowned organic farm selling very high-quality oranges. So I feel very fortunate that they've found their way to Kentish Town. The peel on the Sainsbury's oranges was pale orange with green patches, and so thick and lumpy that, as I was slicing it tonight for Batch 3, I discarded some of it, as it was spoiling the overall look. I'm beginning to think that they weren't actually ripe, which would mean not enough pectin. Hmm.

As usual, the original question – what's wrong with my marmalade? – has led me down several interesting paths. After writing Tuesday's post, I ended up buying a biography of Constance Spry; this time, I found an account of a visit to the Ave Maria farm and watched a video on the science of making marmalade, including some lovely pictures of Seville's orange trees. Both of these were on the website of marmalade expert Vivien Lloyd and are worth a few minutes of your time as you wait for your marmalade to boil. And while Seville's street oranges may not be the finest raw ingredients, I loved the image of abundant oranges growing on every corner, just waiting to be marmaladed.