Hooray! January is here, the Sevilles are in and at last I can refill the pantry with marmalade. We ran out in late October and have been surviving on shop-bought marmalade ever since, which is rather painful for a marmalade addict like myself. Even the good stuff is just too sweet and bland. No bitterness, no bite, no jarringly acid edge. It's just not bracing enough. 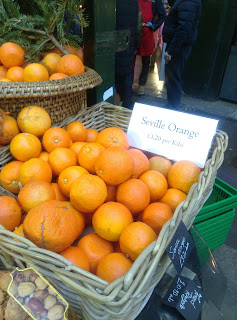 After a disappointing score (15/10, ahem, shows what I know) at the World Marmalade Awards for last year's efforts, I must pull up my socks and find a more reliable recipe. I like the flavour of mine, very sharp and rich and intense, but it rarely sets properly. By the time I get halfway through the jar, I can pretty much pour it on to my toast. So after a bit of research, I've decided to test a couple of recipes that Google seems to think are popular: one by Dan Lepard and another by Thane Prince, both trustworthy names but with slightly different ingredients and methods.

Just for good measure, I'm also going to try an Aga recipe by Tamasin Day-Lewis (I don't have an Aga, but my friends Tim and Tor do, so I shall test it there and leave some behind as payment. Might have to leave several jars, as the thing costs a fortune to run, like sending ten-pound notes straight up the flue, Tim says).

So - first off is this recipe from Dan Lepard, who I met at the Marmalade Awards last year; he strikes me as a very painstaking sort of person when it comes to perfecting a recipe, and he is very keen on his marmalade, so I am sure it's going to work. However, his method requires you to juice the oranges and slice up the peel first, rather than boil them whole and cut them up when they're nice and soft, as I usually do; so as I'm very lazy, it may not be for me. But it also requires you to measure the liquid halfway through and match it to the weight of oranges, which is what many of the experts seem to do. So that may be the trick. We'll see.


P.S. Since the last annual marmalade fest, I've also produced another baby, who has just started to eat proper food. Having failed to instil a love of marmalade into my 7-year-old son (he is a honey-and-peanut-butter man), I'm going to get it right this time. So despite generally avoiding sugar and citrus, I did give her a tiny dab of marmalade yesterday. She licked at it and gave me a bit of a puzzled look. And then she stuck her tongue out for more. Yay! (If any health visitors are reading this, yes I know, but it was just a lick, the rest is all mashed avocado and organic yogurt.)