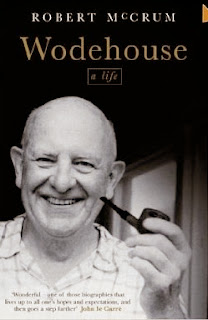 Spent the last two weeks trawling through Wodehouse: A Life by Robert McCrum, convinced it would be full of marmalade references. After all, Wodehouse is the quintessential Englishman, and given that his rather foolish behaviour during WWII saw him exiled to the US, he surely must have sent for marmalade, rather as Edward VIII did in similar circumstances.

His novels are full of marmalade mentions - Bertie Wooster eats it all the time - but not, it seemed at first, the biography. But finally, on page 404 (16 pages before the end) there it was at last, as the author describes PG's daily routine in his US retreat in Remsenburg, Long Island.

'On most days, he would get up at half past seven, go out onto the porch at the back door, and do the "daily dozen" sequence of calisthenic exercises he had performed every day since 1920. While Ethel [his wife], always a late riser, was still upstairs in bed, Wodehouse would prepare his regular breakfast - toast and honey or marmalade, a slice of coffee cake and a mug of tea - and, as part of the early morning routine, he would read a "breakfast book", for example a Rex Stout or Ngaio Marsh mystery. Then he would light the first pipe of the day...'

Not quite the devotion to marmalade I had hoped to find, but never mind - it is a very enjoyable book, full of surprises. The revelation of the early chapters is that before he became known for Jeeves and Wooster, PG was a huge success in the US, writing scripts for popular musicals and mentoring the Gershwins, who looked up to him. This, along with his constant output of short stories and novels, made him a millionaire quite early on in his career. Also, it turns out that he was a compulsive writer - wherever he was, in England, France, the US or in a grim WWII internment camp, he just wrote and wrote and wrote, right into his 90s. Lucky us.