Last week I had the great privilege of staying at Dalemain Mansion in Cumbria, to take part in the judging of the artisan marmalades at the World Marmalade Awards. In theory I was there with my Fortnum's hat on (it co-hosts the awards and sells the winning marmalade) to write a feature for the website - see here - but inevitably I ended up helping out with the judging, and tasting an extraordinary array of marmalades, made with everything from tequila to Marmite (and yes, they were both good).

The judges included keen baker and food writer Dan Lepard; Sandy and Carole Boyd, the founders of the Ludlow Food Centre and Chatsworth Farm Shop; Ivan Day, the UK's go-to food historian; Jenny Linford, author of several food books including this one; and several others besides, all of whom were some of the friendliest people I've ever met, with not an ego between them, despite their fame and expertise. It must be the marmalade diet. 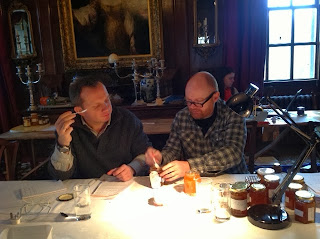 Above: John Aglionby of the FT and food-writer Dan Lepard

Within two minutes of arriving, I was standing in Dalemain's stone-flagged kitchen, discussing the setting properties of spaghetti squash with Dan, and the difficulty of balancing the sugar content with food consultant Michael Perry. The marmalade talk continued through dinner, eaten in a wood-panelled drawing room, warmed by a log fire, and with a Dalmatian and a dachshund sniffing for scraps under the table. It was one of the most convivial dinners I've ever attended. Our hostess was the exceptionally hospitable Jane Hasell-McCosh, who created the Marmalade Awards after finding an ancestor's recipe in a handwritten recipe book. She is single-handedly (well, aided by her helpful children and husband and a band of loyal friends) raising the standards of marmalade across the UK. The competition and the festival have been a huge success, proving, I'd say, that marmalade does have a place in every Briton's heart. It is tremendous fun - do go if you are in the area. All details here.

Of course I am sworn to secrecy as to the winners - they're announced at the festival on 1 March - but for a marmalade nut like myself, it was a fantastically reassuring experience. More than 2000 jars were entered (the awards only started in 2005, with just 50 entries), all different, all creative, all made with love and enthusiasm. Marmalade in decline? I don't think so.

I'll be back at F&M next week for their in-store Marmalade Fortnight, where customers can head for the Food Halls and taste some of the winners, as well as Fortnum's own marmalades. Toast and marmalade as you shop - it's got to be worth a trip to Piccadilly.