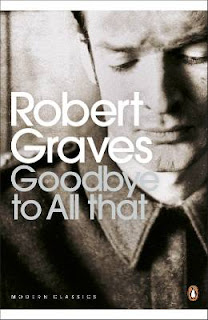 On leaving for a week in Brittany last Friday, I grabbed a random selection of books from my shelf as I headed for the front door. Hopeless, of course; holiday reading needs careful consideration, and this last-minute grab was given anything but.

It turned out to be a rather earnest brace of paperbacks; a book of Chekhov's short stories (abandoned at our Wiltshire stopover after just a couple of paragraphs; the translation was a bit stiff); and Robert Graves's Goodbye to All That, a sparely written, cold-eyed and extremely absorbing account of the horrors of, first, life at an English public school and, second, of the author's time in the WWI trenches. And, as so often happens with the books I read (which do tend to be a bit British/historic/foodie in their theme), it wasn't long before marmalade made an appearance.

"Breakfast at company headquarters consisted of bacon, eggs, coffee, toast, and marmalade. There were three chairs and two ammunition boxes to sit on... [Dunn] had begun telling me just how much I could expect from the men at my platoon inspection of rifles and equipment, when a soldier came rushing in, his eyes blank with horror and excitement. 'Gas, sir, gas! They're using gas!'

'My God!' exclaimed Price. We all looked at Dunn, whose soldier-servant the man was.

Dunn said imperturbably: 'Very well, Kingdom, bring me my respirator from the other room, and another pot of marmalade.' "

Blackadder couldn't have put it better himself.