After my post about labels, a friend sent me this pic and said ‘Now there’s a label for you!’ Indeed. And there’s a concept. Not sure which fazed me the most: beer as a breakfast drink or the troubling sight of Paddington promoting alcohol. 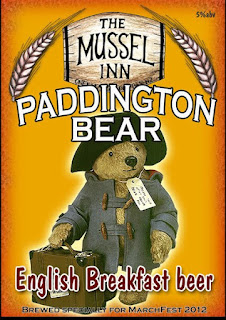 On further investigation, it turned out that the key ingredients of the beer were toast and marmalade.

Question: Who the hell would think of putting marmalade into beer?
Answer: A New Zealander. Of course. Silly me.

So I emailed the Mussel Inn with a few questions, which basically added up to ‘What the…??’ and a very nice bloke called Andrew emailed back in some detail, as a result of which I learned quite a bit about the brewing process as well as about marmalade in New Zealand (it’s usually made with grapefruit). His reply went like this:

‘The beer was made specially for the 2012 MarchFest beer festival in Nelson where we had to make a previously never-made-before beer using secret ingredients and the punters had to try and guess them.

‘All of the Mussel Inn beers have an animal theme, so Paddington Bear fitted in well. I have had a hankering to produce a breakfast beer for a while now, and marmalade on toast – two ingredients that could easily be applied to beer – were the perfect combination from both directions.

'Grapefruit is a very common flavour found in certain hop varieties, such as Cascade, commonly used in American double IPAs. I thought, well if it's grapefruit you want, why not use grapefruit (which is most commonly used in marmalade in NZ)? In reality, we ended up using a blend of grapefruit marmalade and tangelo peel in the prototype beer, which was very pleasing, and then in the official brew we used eight litres of cheap, sweet orange marmalade and a couple of jars of the real deal – made from Seville oranges – cooked up by the grandma of one of our staff members.'

He went on to describe how they toasted five loaves of white sliced bread before adding them to the marmalade mixture, along with malted wort and hops. 'At the end, the slices of toast were reduced to a weird spongy rubbery texture, which I assume was pretty much pure gluten - the starch having been extracted.'

He was pleased to report that the beer sold out on the day and the winner of the 'guess the ingredients' competition chose the Paddington Bear beer as his prize – the prize being 72 bottles of any of the beers featured.

I completely love Andrew’s devotion to his craft and his use of willing grandmothers to provide authentic ingredients. I’m also delighted that, even so far from marmalade’s spiritual home, a New Zealander knows about Paddington Bear and that proper marmalade is made with Sevilles.

I’m a little worried about his long-held hankering to create a breakfast beer, but I guess if anyone can do a solid day’s work after beer for breakfast, it’s a Kiwi. Andrew – we salute you.

Unknown said…
The Mussel Inn! Great place. Haven't been there for a few years though, so missed that particular - somewhat peculiar sounding - brew.
1 October 2012 at 06:37