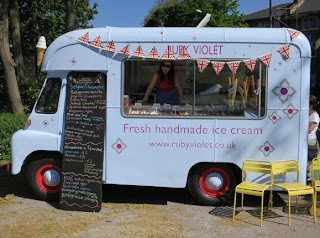 Thanks to end-of-term madness, I didn't have a chance to blog about last Wednesday, when only yards from my home at 8 o'clock at night I was offered free champagne and a cone of marmalade ice cream. Not bad for a school night.

I was just nipping out to Sainsbury's for a pint of milk and ran straight into the opening party for Ruby Violet, an artisan ice cream shop that the entire neighbourhood has been waiting to see open ever since the renovations began some weeks ago. We have all been peering hopefully into the dusty interior ever since, wondering when the ice cream was coming. But at last it was finished; there was fake grass on the pavement, neon signs over the counter and free ice creams being dispensed from a fabulous 1968 Austin van parked outside. I chose, of course, Classic Seville Orange Marmalade Ice Cream in a handmade cone and it was rather good. Especially with champagne. And more especially because it was free.

The next day after school there was a queue out of the door, with wide-eyed four-year-olds literally hopping up and down with excitement as they waited their turn, so I had to go back later to score a tub of the Salted Caramel flavour, which I fed the next day to three delighted children, much to G's horror. (At £3.50 for a small tub, I understand why, but we must train their budding palates to reject the concoctions of vegetable oil and artificial flavourings that too often passes for ice cream while we have the chance.) It went down very well.

So if you are strolling down Fortess Road in NW5 any time soon, do drop in and try the marmalade ice cream. And the Salted Caramel. You can't miss it; just look for the permanently parked ice cream van, which, as a bonus, acts as an ongoing taunt to the local traffic wardens who can't believe that it's allowed to park there all the time. But if they ever try to ticket it in full view of the customers, I predict a riot.