Some thoughts on labels

In a post a while back I wrote about a friend who said that she couldn't buy a jar of marmalade she'd seen because she didn't like the label. While that might strike some as odd, to others it will make perfect sense. The label is telling you what to think about the contents, and she didn't trust its rather rustic, folksy signals. As a preserve, she feared it lacked imagination.

Which made me start looking more closely at labels.

The mistake a lot of manufacturers make is to feature a statement-of-the-obvious image on the label, which is usually oranges/lemons or some kind of botanical image, as if we might otherwise be suspicious of the contents. But what they should be doing is projecting an image, not depicting the ingredients. Is this marmalade for the very sweet-of-tooth, or for hard-to-please urban foodies hoping for a surprise ingredient (vodka, basil, Marmite)? Is it for aspiring housewives (preserving pans and wooden spoons) or retired colonels (words only, crisp typography, no damn fool pictures)? This is what the label is for.

The benchmark is, of course, Frank Cooper; classic, dignified, not too olde-worlde, surviving nicely in the 21st century. 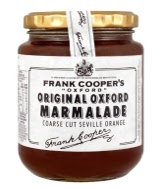 But I also like this, which I saw in the achingly chic Melrose & Morgan: 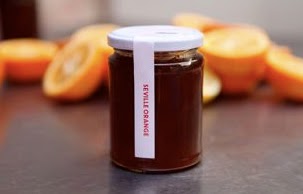 This takes the prize so far for absolute minimalism, and is to be applauded. It means you can really see the marmalade in all its tawny orange glory, and it's not trying too hard. It's just very.... calm.

I shall trawl the grocery stores of north London to gather some more examples. Do please send in your nominations. I might even give out prizes.